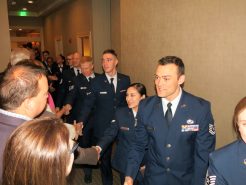 The Greater Belleville Chamber of Commerce’s Belle-Scott Committee hosted their 68th Annual Enlisted Dinner on Thursday, March 8th at the St. Clair Country Club to honor the enlisted men and women of Scott Air Force Base and thank them for their bravery, commitment, and sacrifice to our nation.

The Belle-Scott Plan for practical community relations between the City of Belleville, Illinois and Scott Air Force Base was established in September 1950 and publicly announced at the First GI Pal Dinner in November of that year. This plan offers a direct means for the two communities to work together to promote matters of mutual interest still today.

To see more photos from the event, click here.