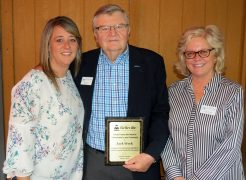 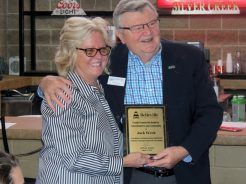 The Ambassador Club of the Greater Belleville Chamber of Commerce is very pleased to honor Jack Weck with the March 2018 Commitment to Community Award.

Jack Weck has been a lifelong resident of Belleville and is a dedicated member of several organizations in our community. Jack completed 50 years of employment at the Missionary Oblates of Mary Immaculate in Belleville with his last position as Donor Events Advisor. Jack retired in May of 2010 and has continued to help the Oblates in his retirement years. Jack Weck received the DeMazenod Award in February 1998 which is given to lay people who show exemplary service to the ministry of the Missionary Oblate Fathers.

Jack currently serves on the Foundation Leadership Council for St. Elizabeth’s Hospital. This team reviews monetary contributions and where best those funds can serve the community, such as a 3D Mammography Machine for Imaging, Treadmills for Rehab, Temperature Management System for the Critical Care Unit, Disinfection Robots for Environmental Services, and 3D Echocardiography for Heart and Vascular to name a few. He also volunteers there as a Catholic Eucharistic Minister serving patients and their families with prayer and
communion.

Jack is also a long-time volunteer serving the community through Belleville Tourism and acting as an ambassador for the Greater Belleville Chamber of Commerce. He volunteers at monthly events, attends ribbon cutting ceremonies and volunteers for several events throughout the year such as Chili Cook-off, Ale Fest, Art on the Square and the Otto Golf Classic. He also assists with the large distribution of Belleville’s yearly event and holiday brochures to the business community.

Jack has also held the following volunteer positions over the past several years:

Jack has been married to Sandy for 54 years and they have six children.