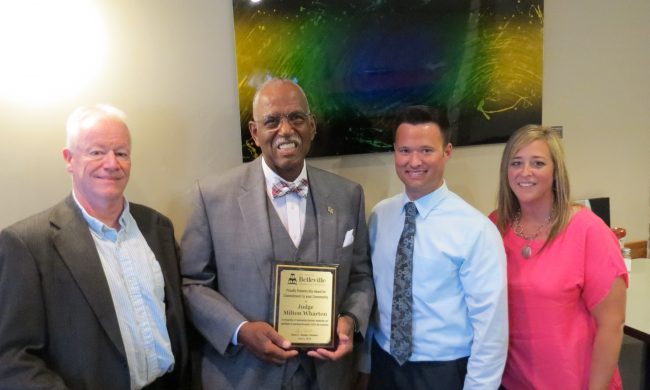 The Ambassador Club’s Commitment to Community Award is presented quarterly to a Chamber member who demonstrates commitment to improving the quality of life for residents and/or businesses in the greater Belleville area. The Ambassador Club is proud to present this quarter’s award to Judge Milton Wharton.

Judge Wharton has a long history of public service in the greater Belleville community. After graduating from DePaul University in 1974, Wharton began working in the St. Clair County Public Defender’s Office and was eventually appointed an associate judge in St. Clair County Circuit Court in 1976. This is where he met the late Dr. Peter Soto, a pathologist, who encouraged him to get involved with the St. Clair County branch of the American Red Cross.

Through his work with the American Red Cross, Judge Wharton realized that community involvement was a necessary duty of any civil servant; especially for judges, who have limited opportunities to keep in touch with the people they serve. Being out in the community and interacting with the public allowed Wharton to be not just a judge, but a counselor. His goal was to see what he could offer the people in his courtroom so that they could move on from their past and not leave them in worse shape going forward.

Judge Wharton’s philosophy in the courtroom was something he developed early on in his career after being moved by wise words from a colleague, Billy Jones, “Never judge a man by the heights at which he attained, but by the depths in which he has struggled.” This notion shaped the way Wharton saw the world and the people who found themselves in his courtroom.

Judge Wharton spent many years as the presiding judge of the St. Clair County Juvenile Court. This experience led to his founding role in the establishment of the Court Appointed Special Advocate (CASA) program of Southwestern Illinois, one of his proudest achievements.  Wharton is also a co-founder of Racial Harmony, a not–for–profit community organization that acts as the liaison or neutral party to assist all members of the community to generate and promote understanding, cooperation, and communication among all races and ethnic groups.

Since his retirement in 2011, Judge Wharton has continued to serve the community in a variety of ways. He has taught classes at Lindenwood University – Belleville, served on the East St. Louis School District #189 Board, continued to work with CASA, and is on the Executive Board of the St. Louis Chapter NAACP.